A lot of people think we only use bodyweight but this is simply not true. We are not biased towards any type of training because in the end all training is training.

We use any tools at our disposal to develop the body and enhance our ability to move. We have many videos with weights, kettlebells and gymnastic rings.

Whatever works the best for our desired outcome, we will use without limitations.

The reason we use dominantly bodyweight in our training is that for the most part it works the best. However, it's not perfect and lacks several important components.

Mastering your body is only one part of the equation. You should also be able to manipulate objects and HUMANS (wrestling, BJJ, sports etc.).

The ability to master your body is a good level but the reality is that many athletes fly at a higher level because they haven't only mastered their bodies but they have also mastered themselves in relation to external objects and forces (balls, javelins and other humans).

For example, one arm handstand is a lower level skill in comparison to throwing the javelin well or generating lots of punching force.

Many movement practitioners look up to these bodyweight stunts as something impressive when in reality you will see more impressive displays of movement in mixed martial arts and Olympic sports.

It depends on your personal aspirations and goals what you want to achieve. We are lions of the fitness industry and want to aim for the highest potential.

Movement training (Movement 20XX) allows you to reclaim the sovereignty of your body (your birthright) which is the minimum requirement for a healthy and functional body.

Athletic training (Athlete 20XX) enhances your body to a level where it can perform at the highest level and teach you how to control and resist external forces (stability training).

The Problem with Bodyweight Training

Especially in the beginning, bodyweight training is the best. The problem arises when you try to bring more novelty and sophistication to your training.

Contrary to the common belief, we actually believe that bodyweight training is more than enough for the lower body but has limitations for the upper body.

Your legs will be stronger and more complete with bodyweight training than with pure weights alone (especially if you only do deadlifts and back squats).

The problem with upper body bodyweight training is that there's too much resistance and it's too limited for the shoulder joint.

For example, if you use light weights to train the shoulders (as we do in Athlete 20XX), you can easily adjust the rotation of your shoulder, the angle and the distance to emphasize different parts and motions of the shoulder joint.

In theory this is possible with bodyweight training but not in practice. The problem is that the resistance of your bodyweight will be too much for the weak parts of your shoulders to handle.

Even professional gymnasts use plenty of weights to train the shoulders because they actually understand how to develop the shoulders.

This does NOT mean bodyweight training is not good for the upper body - we are simply saying that you also need weights to fully develop the shoulder girdle.

Bodyweight training can also be done in a good way and in a bad way. For example, when you do the movement routine below, the bear-crab roll will add significantly more dimensions to your bodyweight training.

Here's a fantastic movement routine to develop a powerful upper body. We have two versions: beginner routine with just your bodyweight and an advanced version with weights.

One of the greatest benefits of this routine is that you will develop supportive strength in your structure (something almost everyone lacks unless they have done movement training or yoga). Other benefits include:

Everyone should start with the bodyweight only version. We continue to say that weights and more resistance is not always better.

You will make the best progress when you find the sweet spot of resistance and it's NEVER the heaviest you can lift. 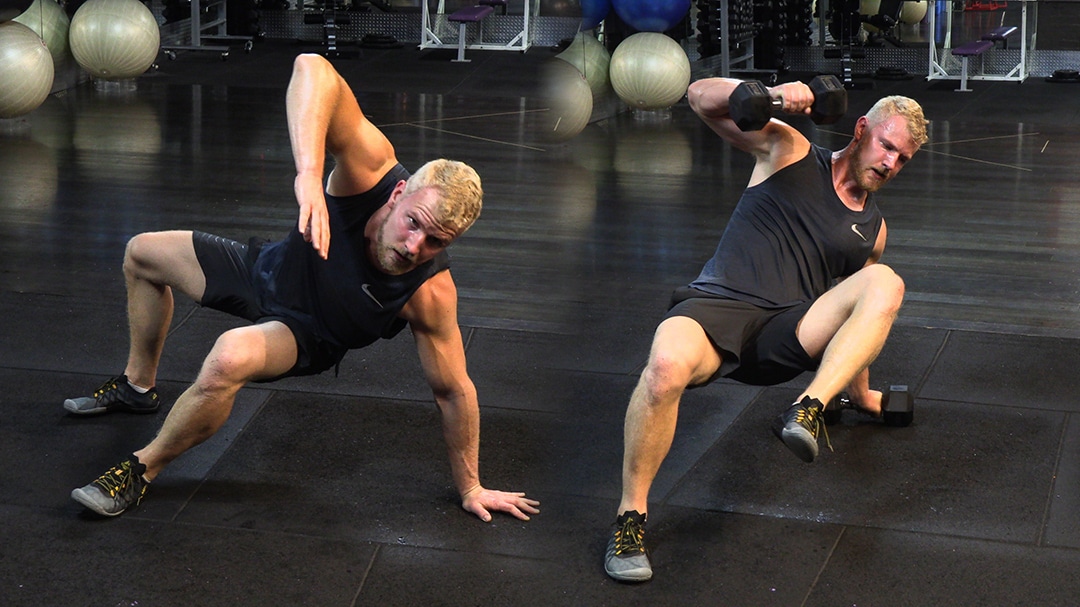 We already covered bear-crab roll in the last movement routine but it's again in this routine because it's one of the best movements you can do.

Bear-crab roll is one of the many movements of Movement 20XX, there are 53 in total to emphasize different parts of the body.

Bear-crab roll is basically the transition between the crab walk stance and the bear walk stance. What makes it special is that you will rotate around your shoulder and hip.

You obviously also need to support yourself with your structure the entire duration of the movement. As a result, your core, shoulders and wrists should get very strong.

The harder variation of the bear-crab roll is to add small weights. We are using really the max limit here (10 kg per dumbbell) - if you pick dumbbells too heavy, you just destroy the fluidity of the movement.

With any movement where you are using weights, we never want to practice moving the weight (this is what everyone is doing), instead we want to use the extra resistance to further develop the movement of the body.

Bear-crab roll should already humble a lot of people when you do it for a long duration but when you add dumbbells, it turns it into a beast. 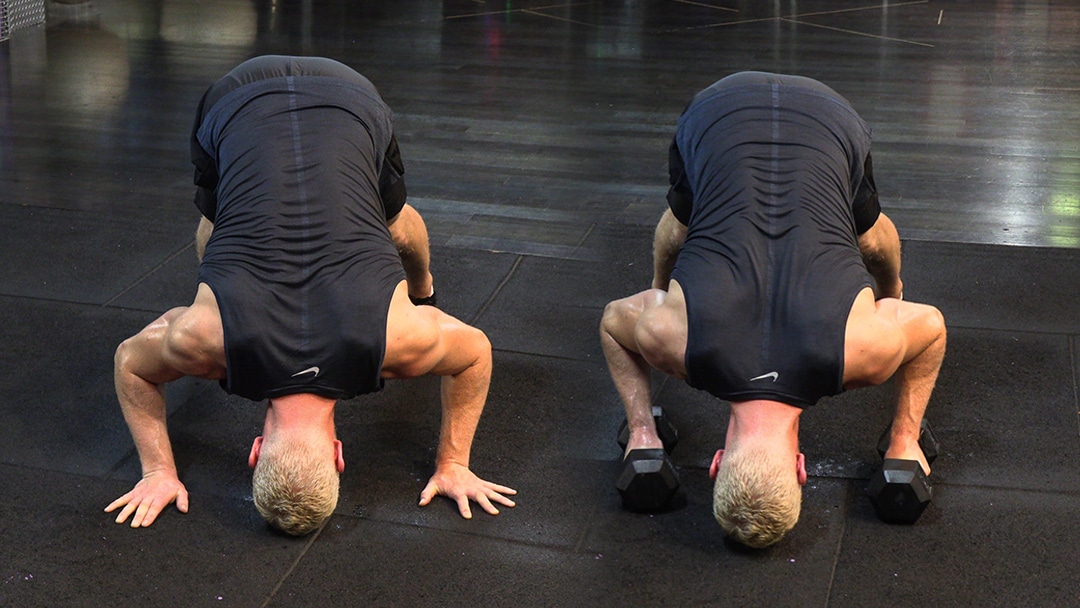 Pike push up is the bodyweight equivalent for the overhead press. The pike push up will develop your shoulders, traps and triceps. Dumbbells can increase the depth of your push up.

As long as you do the pike push up with good core and hip stability, it can produce great results. You will get plenty of range of motion without using the dumbbells.

The range of motion of exercises matter but it doesn't matter as much as calisthenics practitioners think. What actually matters is the focus and quality of your press.

The mainstream fitness industry thinks that as long as there is no momentum and the exercise is done with the full range of motion = it's a good form when in reality this is a very low level understanding of the proper form. 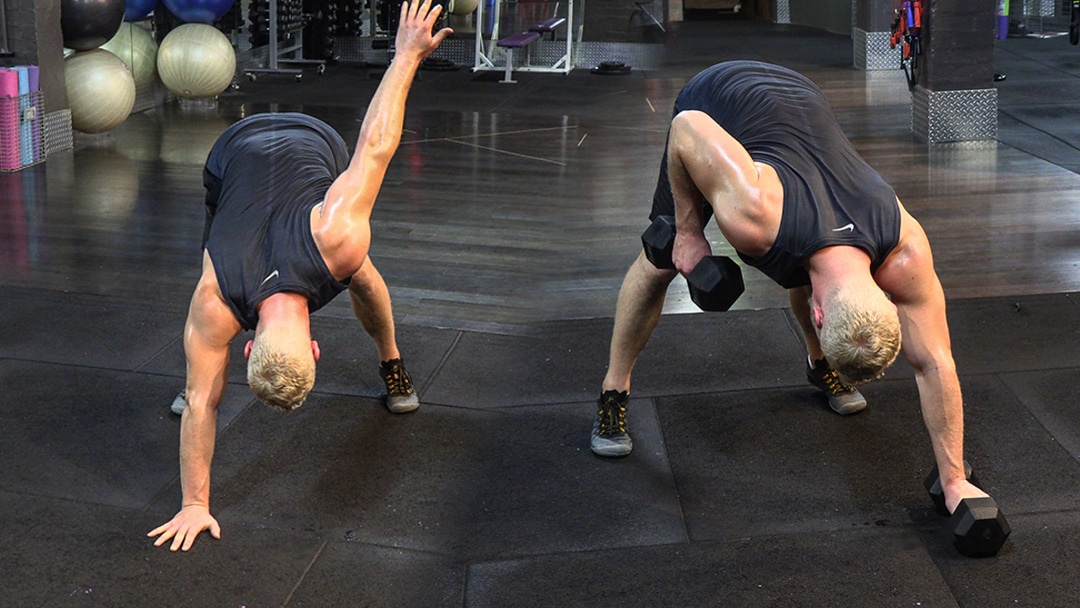 The purpose of the pike shoulder raise is to develop the back muscles while holding the pike stance.

The great thing about this exercise is that you will develop unilateral supporting strength on one side while developing the back muscles on the other side (rowing side).

The bodyweight variation is to do pike shoulder raises without any weight. It's a misconception to think that just because there is no external weight involved that it's not effective.

The mainstream fitness thinks that you have to lift heavy to produce results. In reality, the right amount of resistance produces the best results as we have stated before.

If you do the pike shoulder raises in the movement routine, you should feel your back and shoulder muscles engage and get sore - as long as you are doing the movement with control and focus.

The pike dumbbell row is very different exercise because the arm is bent but it mostly works the same muscles such as lats and teres major.

Try this routine out and feel the burn. A routine like this can be done once a week for good results.

If you want to stop messing around and are ready to make a real commitment to your body, you can join Movement 20XX. We just recently added new payment options (monthly memberships) to make it more affordable to join.