When you study something passionately for a decade or longer, it's hard to be surprised or amazed after a while.

You know all the prominent teachers in the field and have at least some understanding of what they are teaching and what they are doing.

Many of these teachers and their crafts interact with each other and eventually contribute to each other's development. This is basically what the Western health & fitness world really is.

Although these different physical practices can be massively different, they often work under the same fundamental truths and frameworks – the same Western way of thinking and seeing the world.

It has been a very long time since anything has surprised or amazed us in the field of fitness or even has gotten us excited. This is why the craziest thing is that we were repeatedly surprised by Jiang Yu Shan.

Anthony from USA has a very similar experience working with Jiang Yu Shan.

We had experience in the Western Kung Fu (Tai Chi) and Qigong before. The team of VAHVA had even lived in various Asian countries (China, Vietnam, Malaysia) for 1.5 years. You would expect we know at least something?

Once we started working with Jiang Yu Shan, many of the things we witnessed with our own eyes were only myths and legends written in some old Shaolin books. This time they were just real.

Meeting Jiang Yu Shan was an experience. For example, in the ancient Shaolin scripts they talk about the iron palm, iron fist, diamond fingers, iron shirt and so on.

Some people practice these skills even today but very few in the world have reached the level of mastery in any of these skills. Truth be told, we didn't believe in any of this stuff until we met Jiang Yu Shan.

It's hard to believe it until you see it with your own eyes. Jiang Yu Shan's hands are massive due to the hardening practice and it's not just cosmetic – they are hard as rock as well.

In Jiang's home dojo, we hit an iron bag softly and our fingers and palms were tingling and radiating for several minutes. The next minute Jiang Yu Shan is forcefully pounding the same iron with every part of his hand...

Imagine a fist or fingers like this hitting someone. Not only is the hand protected but the effects are also devastating. Of course you also have to know how to fight. Until you see hands like this in action yourself, it's hard to believe any of this. 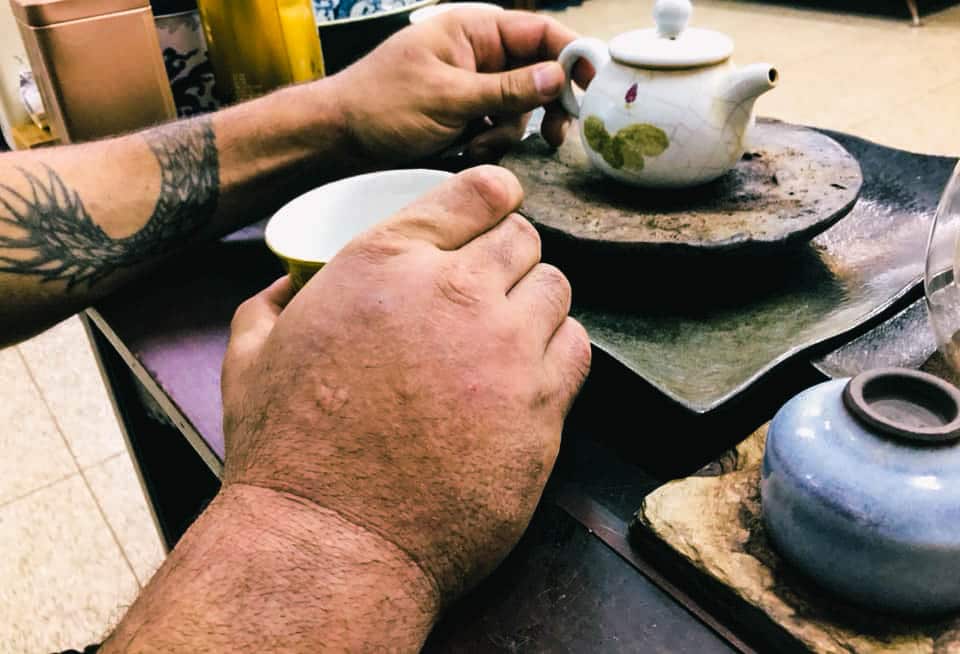 A Door and Window to a New Side of Life

This was only one aspects of the visible physical part. Even the cultural part amazed us.

The master is an avid tea drinker and he shared with us 20 years old Pu'er tea which was brewed with a very special brewing method (HINT: watch this video and observe what he is doing).

This tea was incomparable with anything we had drank in the past. It turns out that age is a very important factor when it comes to tea and it can dramatically change the taste and effects of the tea.

Later we learned that the tea culture in Asia is incredibly developed where only 1 kilogram of the finest Da Hong Pao tea can cost up to $1.2 million USD. If you are the typical Lipton drinker, you probably haven't even heard of Pu'er or Da Hong Pao.

Not only that, Asians also have methods to test the quality of tea that makes the wine world look unsophisticated and basic. You see, the rich Arabs and Asians drink mainly tea, not wine.

Jiang Yu Shan calls the regular tea you can get from a grocery store "dishwater" so let's leave it at that.

Later, the master kept surprising us, unintentionally, time after another. The training methods we have learned are something that dig way deeper into the body than anything we have done in the past.

People see Jiang's harden skill without realizing that he earned his 9th Dan (or duan) in Chinese kung fu due to his internal skills. For example, Tai Chi is a soft internal martial art. 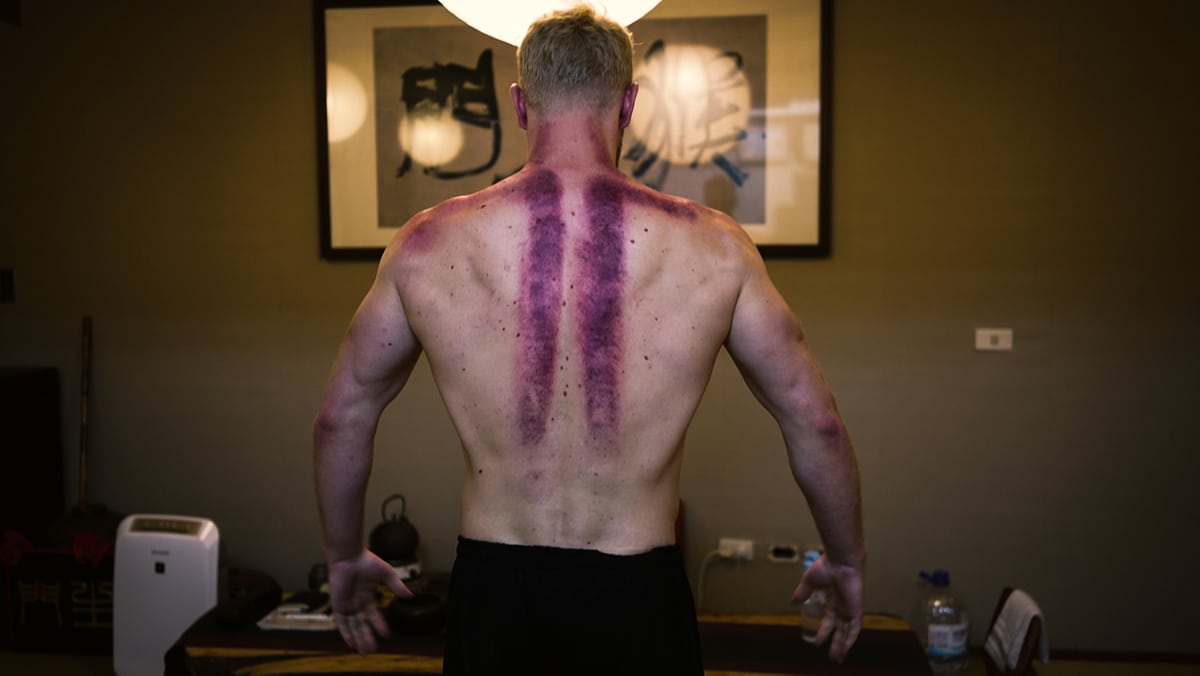 The health practices we have experienced and studied have been completely foreign to us. Jiang Yu Shan is not only a Kung Fu master but also a master of Chinese medicine and various Asian health practices.

For example, according to him and other Taiwanese experts a lot of people do the popular method of cupping totally wrong in the West. Jiang is a licensed chiropractic specialist in Taiwan.

The reason why we never learned any of this stuff ourselves despite living in Asia for so long was that we never integrated into the culture and created the trusted connections (that take years and even decades) needed to delve into this knowledge.

Almost all Jiang Yu Shan's friends in Taiwan are Taiwanese. He is not the typical expat who drinks beer all day and teaches English during the day, in fact he is not friends with any expats like this.

The reason why he knows this stuff is because he has earned the trust of the locals and inherited a pure style from his Taiwanese master.

In China, Taiwan and Japan everything is about "face" and respect. If you think you can pay a sum, walk into someone's "house" and learn his family secrets, you are grossly mistaken. 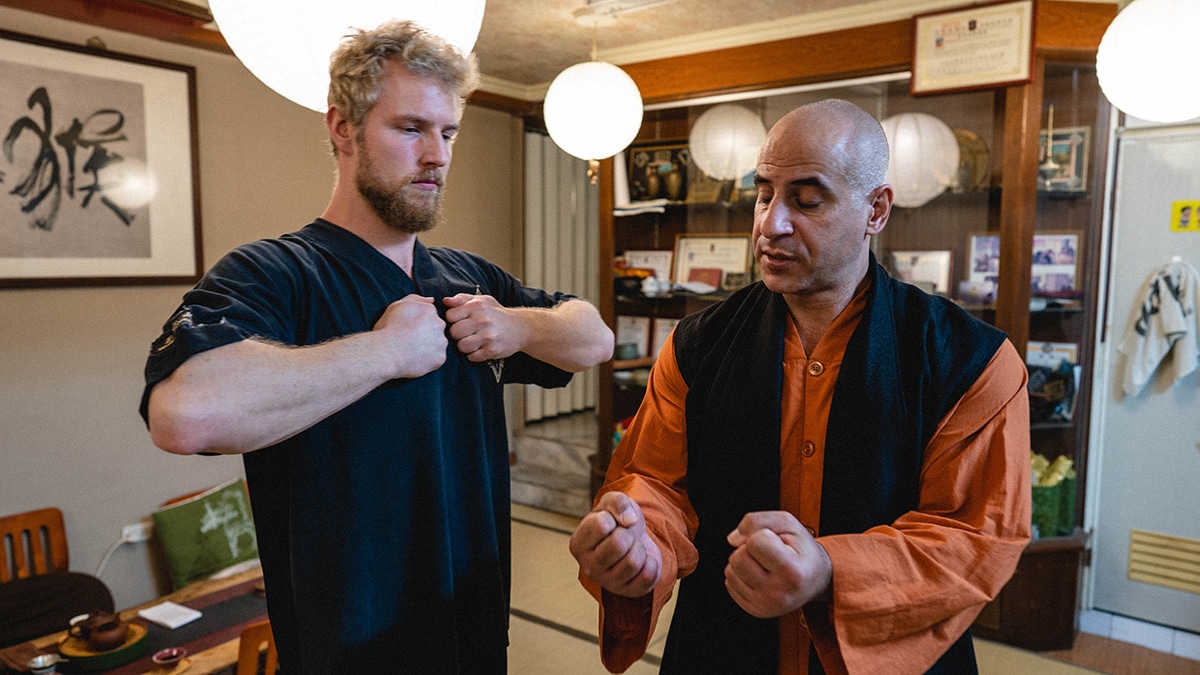 One thing Jiang criticizes in the West is that everyone is an expert with a minimal background or proper knowledge.

In Kung Fu and Qigong becoming a master takes decades. In the West, you can become a trainer after a few months of studying. In many fields, there are self-proclaimed experts who don't even walk the talk.

Nowadays, the Internet is full of "breathing experts" who don't have any real background in the field and have just copied each other's methods without having any real understanding of how breathing even works.

We've attended 1 day workshops for breathing from big names in the business and although we learned useful techniques, we didn't truly learn how to breathe.

Only recently we understood that all the muscles associated with breathing need to be developed just like you would develop your biceps. And they can be developed to a very high level.

Learning The Breath of Mental Power that is covered in Jiang Yu Shan's course was a great step. It fundamentally means full body breathing by learning to control the mechanics of breathing with your mind.

When Jiang Yu Shan said that he can teach breathing, we didn't know how much he knew. He wasn't doing TED talks and promoting himself as the "breathing expert" in every media outlet after all.

We were surprised in this area as well and consider Jiang Yu Shan easily a top teacher in this field. Later we learned that in Qigong proper breathing is everything so it only makes sense.

There is still A LOT we haven't shared about the master, in fact we are learning more all the time as well. Jiang has lived a long life and hasn't only stayed in Taiwan.

Very few people know that he also lived 6 months in India back in the early 2000s studying Hanuman (the monkey Hindu god) and meditation. This is why he is able to explain Wim Hof's breathing methods in detail as well.

At this point, it feels like the Western teachers have very little to teach us. This is why we are fortunate to have this connection to the Eastern world.