The grandmaster Jiang Yu Shan demonstrating a special and beautiful movement sequence from his Trinity System.

In the ancient Shaolin temple, the monks were not obsessive about just one style as many are today.

For example, according to Jiang Yu Shan (who has extensively studied Chinese martial arts since he was a kid) everyone in the Shaolin monastery learned Lohan Quan as their first martial art which was considered the "strongest fist" of the temple.

Many of the monks were accustomed to all forms of fighting: striking, wrestling (Shuai Jiao), grappling, striking and more. In addition they learned Qigong and Chinese medicine.

Today, most practitioners and masters have too much pride in their own styles and refuse to master or practice other styles even if it could be massively helpful.

Jiang Yu Shan is the inheritor and the grandmaster of the Hou Quan Men monkey style but he also knows a lot about the other Kung Fu styles and has reached the level of mastery in other forms of Kung Fu as well.

No one can question his skill and knowledge in Xinyi, Wing Chun or Tai Chi.

Moreover, Jiang Yu Shan has gone to great lengths to learn the real ancient knowledge. He never wanted to move and fight like everyone else. He wanted the original wisdom and not the mainstream knowledge that was watered down by the cultural revolution in China.

"The original Chinese Kung Fu is well-preserved in Taiwan", the master says.

There are great schools in many parts of Asia but these are not easy to find. Just like in Japan there are countless secret martial arts that are practiced by only small groups of people, this is the same with Chinese Kung Fu.

But do you know that the original Yi Jin Jing can be totally different from the one you can find from a typical Kung Fu class in the West?

This sequence demonstrated in the video is part of a bigger form and it's actually a Xinyi Tai Chi Stone Monkey Form.

Jiang Yu Shan has done great and monumental work in discovering, mastering and developing the original knowledge and his Trinity System is the result.

In the Internal & External Kung Fu course you are learning many different styles of Kung Fu brilliantly integrated together. Monkey style Xinyi ba (Hou Xing Xinyi Ba) and a lot more. It truly feels like this is how it was originally intended.

Moreover, due to the master's background, the styles have become practical and combat effective. 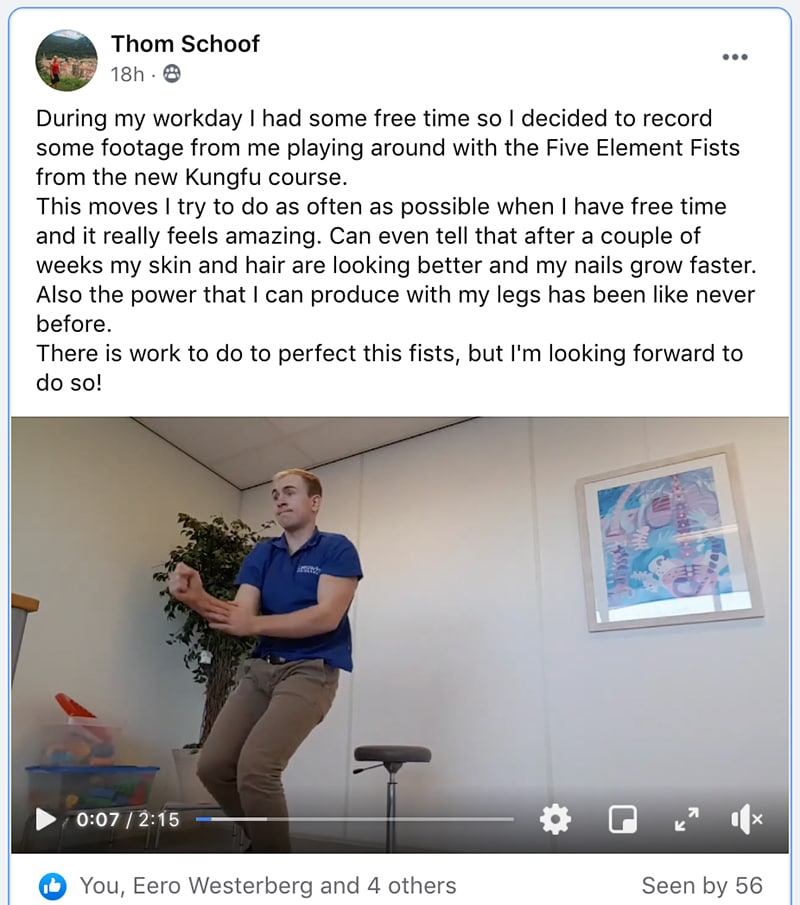 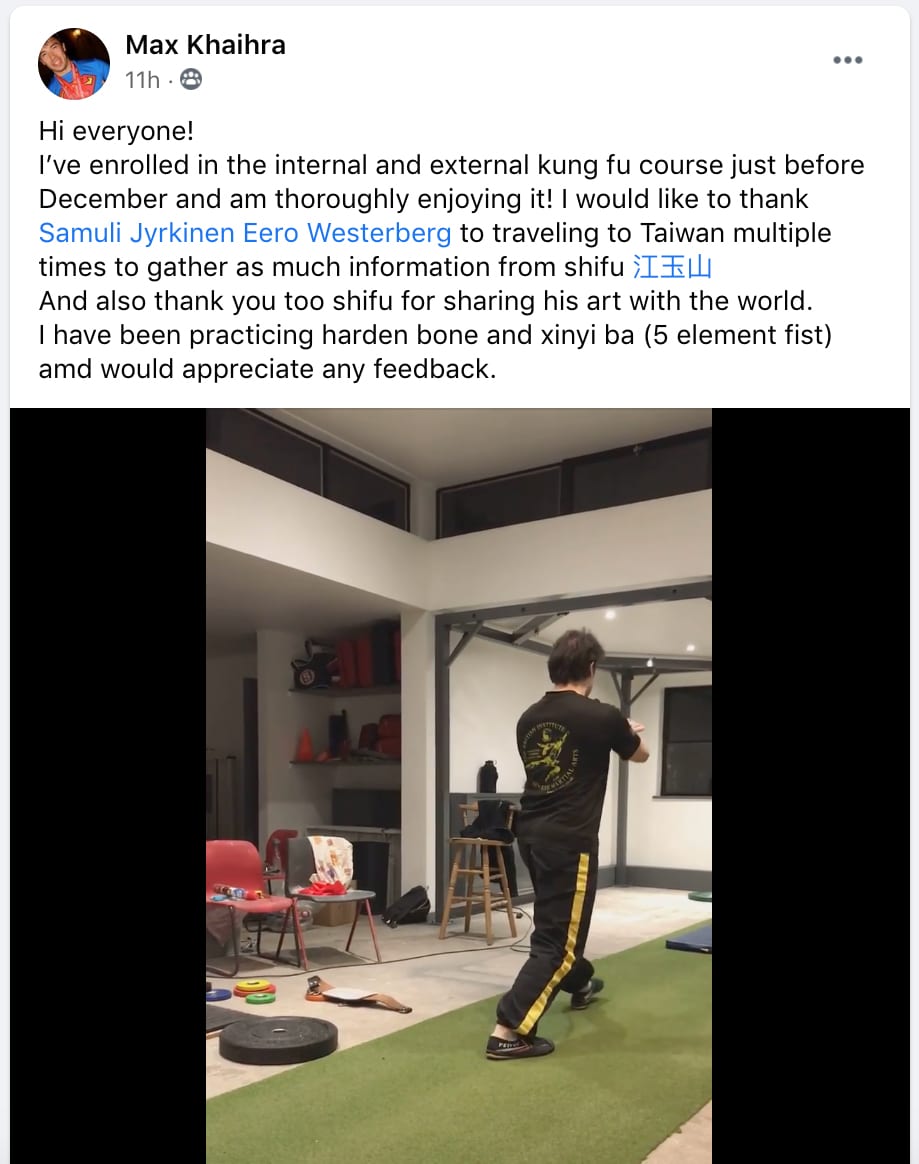 This is only a small clip of what the master can do. He is a living encyclopedia of Kung Fu and has more knowledge than anyone can fathom.

Prior to us, he was barely showing anything outside his school and he is still holding onto a lot of knowledge.

And by the way, this is how everyone who practices these original styles act. In most schools the students are not allowed to post any videos online (only pictures). They really guard their "treasures" from other people.

And we are not exaggerating here. There are monkey schools in Malaysia, China and Hong Kong but you can find almost no video footage of anything. Only pictures. The "Monkey Kung Fu" you often find online is Beijing Opera Wushu – not the real thing!

Moreover, Monkey Kung Fu is not a small system either. It consists of many different monkey styles such as Tall Monkey, Shy Monkey, Stone Monkey, Wood Monkey and so on. In this sense it's quite incredible how little knowledge has managed to get out over the years.

And all of these styles have long and detailed forms (some are available inside the master's Monkey Fist Door 24 Warrior Qigong Set). You will master a different style depending on your personality and body type.

In this regard the grandmaster Jiang Yu Shan is a rebel because he wants this knowledge to live on and not disappear overtime.

Inside the courses of WarriorNeigong.com we have hours and hours of instructions to some truly mind-blowing stuff. Internal & External Kung Fu course alone is almost 8 hours long.

And there is no filler here, it's really detailed instructions to a variety of different methods and techniques one after another. Just watching the course through will take a day, practicing it a lot longer and mastering it a lifetime...

You will learn the basics of fighting, how to cultivate internal energy and rage, how to develop the movement and power mechanics of the body and a lot more. In External Kung Fu we cover the "hard" styles of Kung Fu. 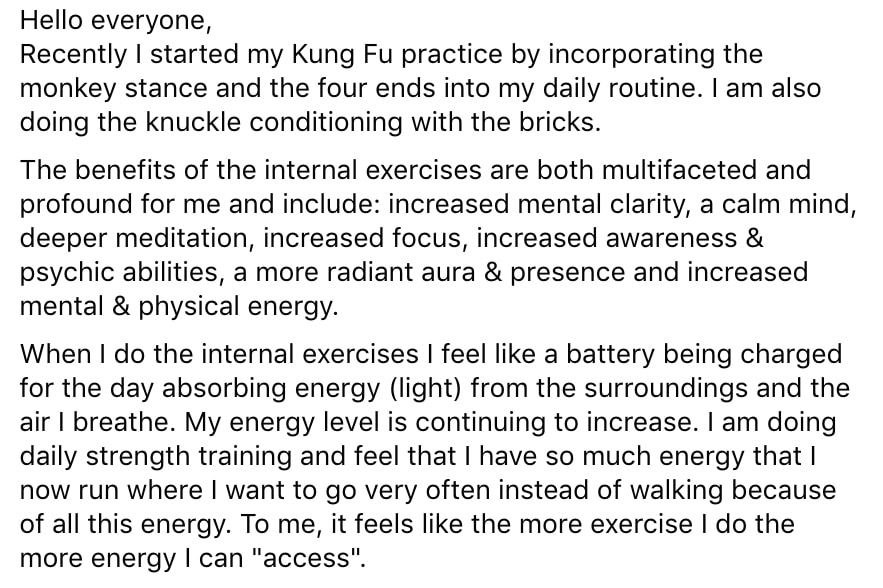 The course has so many techniques to learn it will take a long time to master it all but once you do, you will have an amazing repertoire and tools to be a more complete martial artist.

A lot of the content is something that is hard if not impossible to find anywhere else.

You can learn more at WarriorNeigong.com