25 different squat variations to hit the legs in a variety of ways. Excellent squat exercises from absolute beginner to elite level!

With little changes the basic squat can be modified into completely different exercises which target different parts of the lower body.

Back squats and front squats are phenomenal exercises but they alone won't be enough. You will simply not target all functions and muscles of the lower body.

When it comes to athleticism and movement quality, versatile leg training will produce the best results. Back squats can build power to your hips, but power alone won't get you very far.

In Movement 20XX online course and in our training style in general we always aim to target all functions (articulations) of the legs and make sure no muscle gets overlooked.

With little modifications the squat exercise can be tweaked to target glutes, quadriceps or adductors. There are also squat variations for different attributes of the lower body whether it is explosiveness, mobility or stability.

Conventional leg training can build big legs, but with conventional training it's rare to get defined athletic looking legs that look balanced from every angle.

Conventional lifts like the back squat will mainly target the prime movers such as the quadriceps, glutes, hamstrings, but how about the adductors, lateral glutes, all heads of the quadriceps and calves?

We have demonstrated 25 amazing squat exercises. There should be enough variations from absolute beginner to elite level. 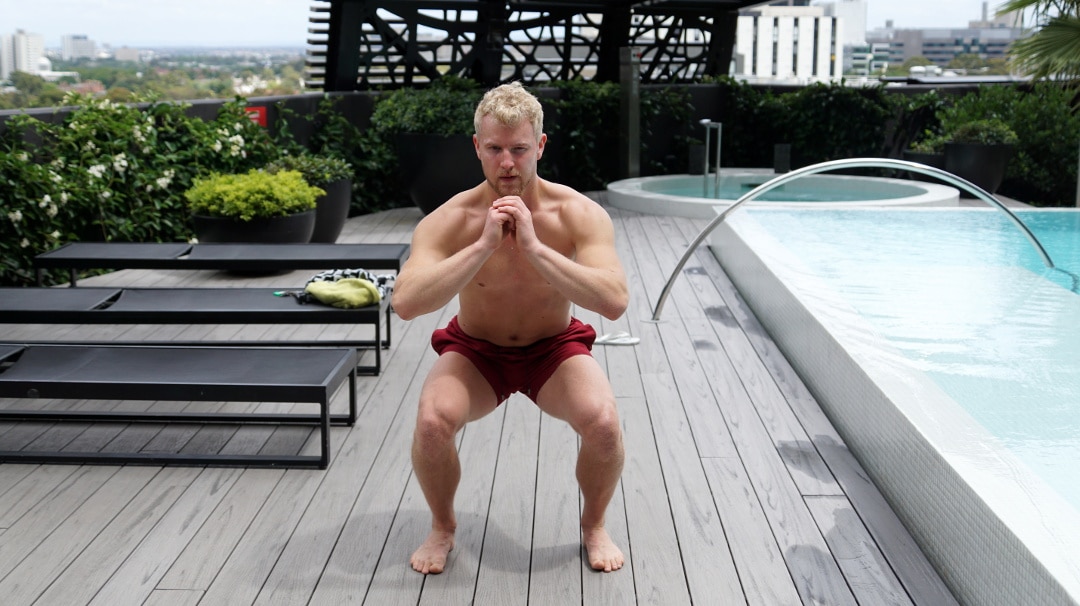 Contrary to the common belief, bodyweight squats rock and will produce great results if you utilize them correctly. Adding weight is not necessary believe it or not.

Nowadays people are far too eager to add heavy weights to their squats and although it can be cool to be able to lift heavy, it's not good for the legs. You are mostly targeting the prime movers while ignoring the smaller muscles.

A basic shoulder width bodyweight squat is fantastic for quadriceps, hamstrings and glutes. There are many different ways to squat:

The basic squat should be done in a relatively slow and controlled fashion because this way you will build strength and mobility in all muscles that are worked in the squatting range of motion.

Fast and jump squats are great, but the slow squat needs to be mastered first. Nowadays it's very rare to see anyone doing a proper squat. 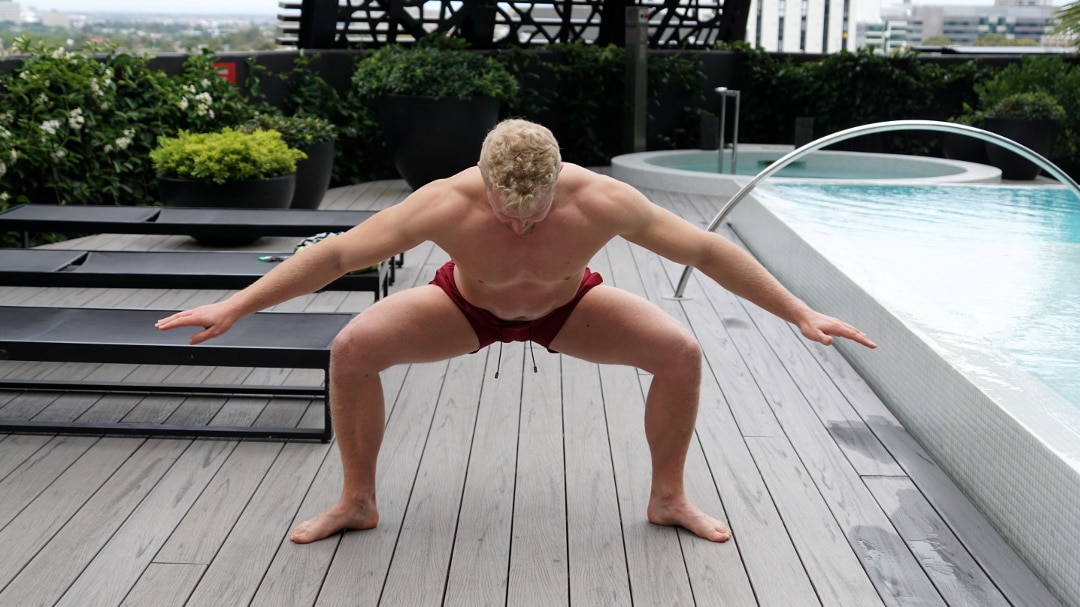 Adductor squat is a specialized squat variation where you never extend the hips. Instead you are leaning forward all the time and squatting in a slight bent over position.

The reason for this body angle is to minimize hip extension and let you focus solely on the hip adduction. In the adductor squat we are targeting the inner thighs (hip adductors).

Take a wide stance where your toes are pointing outwards. Focus on squeezing the inner thighs (hip adductors) with every repetition. The upper body should stay stationary and stable the entire duration of the exercise. 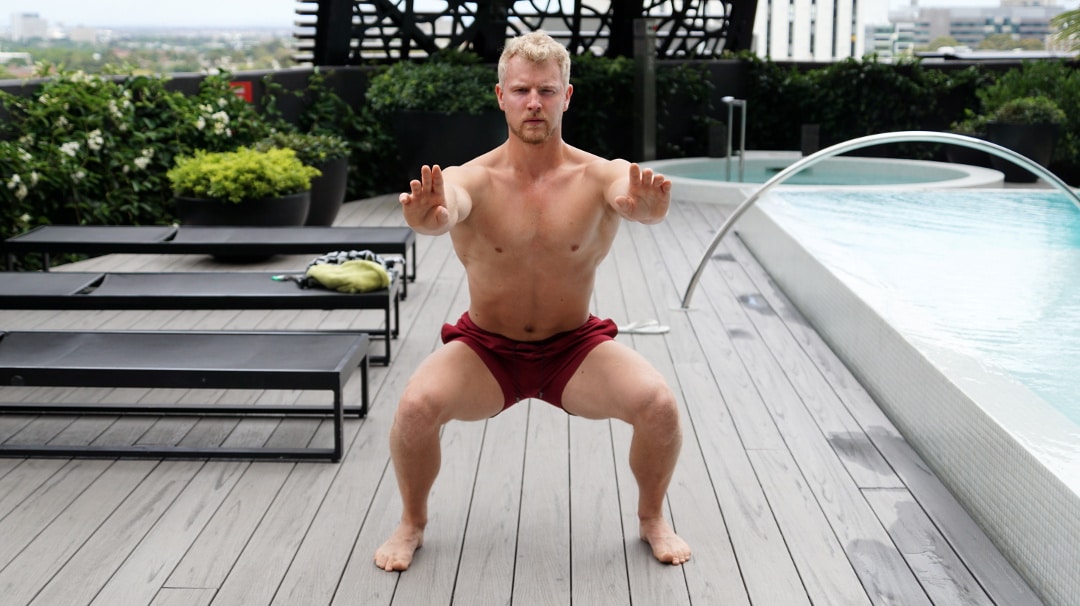 Kung fu squat is basically a bodyweight front squat. Take a slightly wide stance and point your feet forward. Your knees are supposed to go past the toes and the upper body should be as upright as humanly possible. 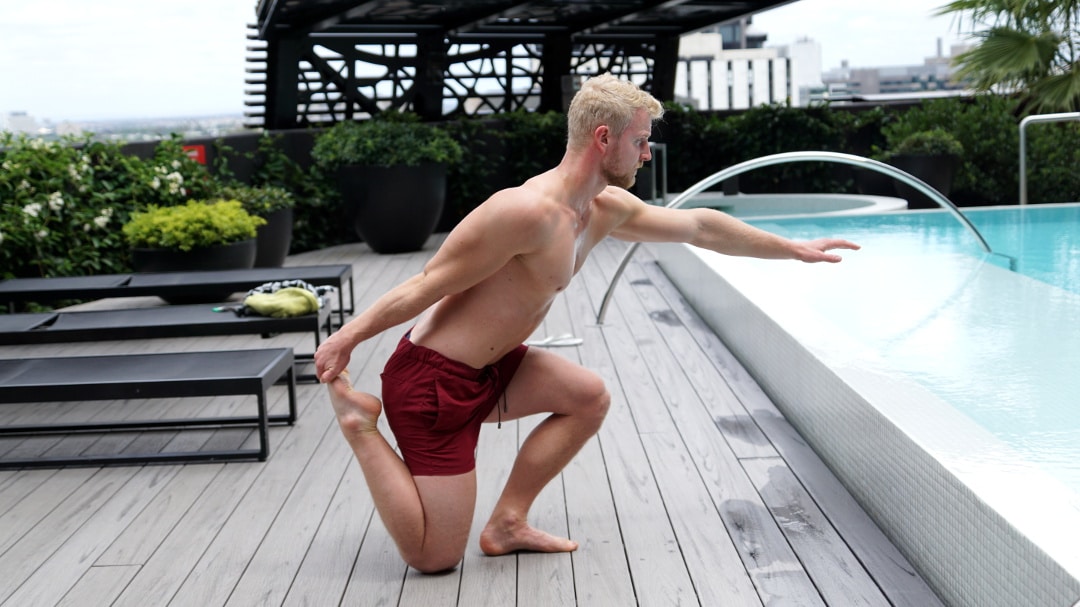 Skater squat is a single leg squat that dominantly focuses on hip extension. Your quadriceps also need to work and stabilize but majority of the force should come from the glutes and hamstrings.

The hardest variation of the skater squat is called the shrimp squat where you are holding your back foot with one or two arms. This will make the squatting mechanics significantly harder and force you to use more quadricep strength with the front leg. 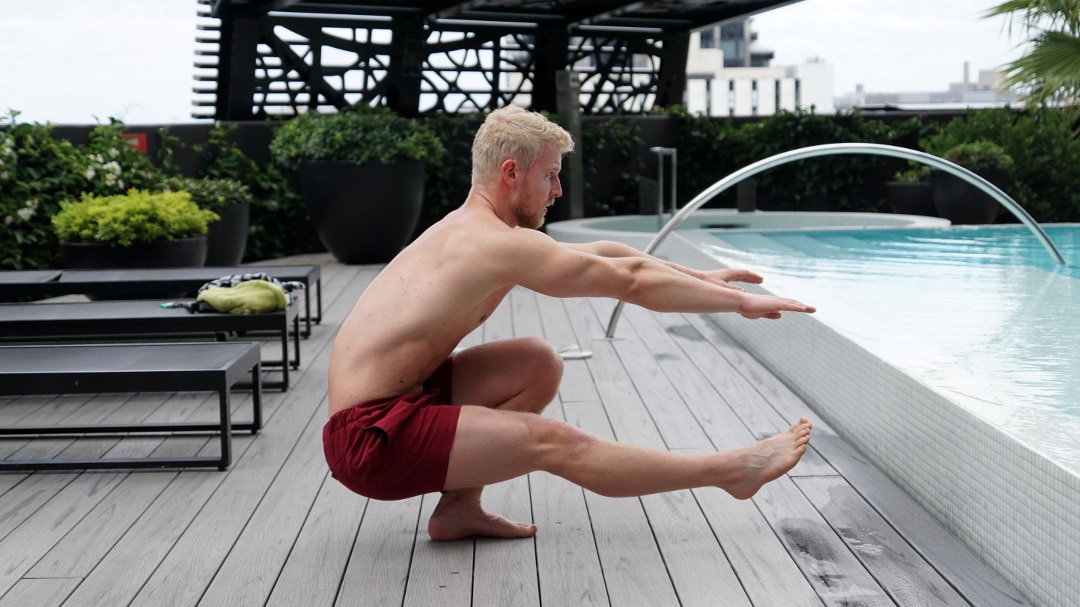 As a result, pistol squat is one of the toughest exercises you can do for your quadriceps. Many can do the pistol squat but it's rare to see good control and mobility in the knee extension - instead most people just fall down and explode up.

In addition to working the quadriceps, your hamstrings and glutes are also worked and you also need to have excellent stability and balance in the entire body. 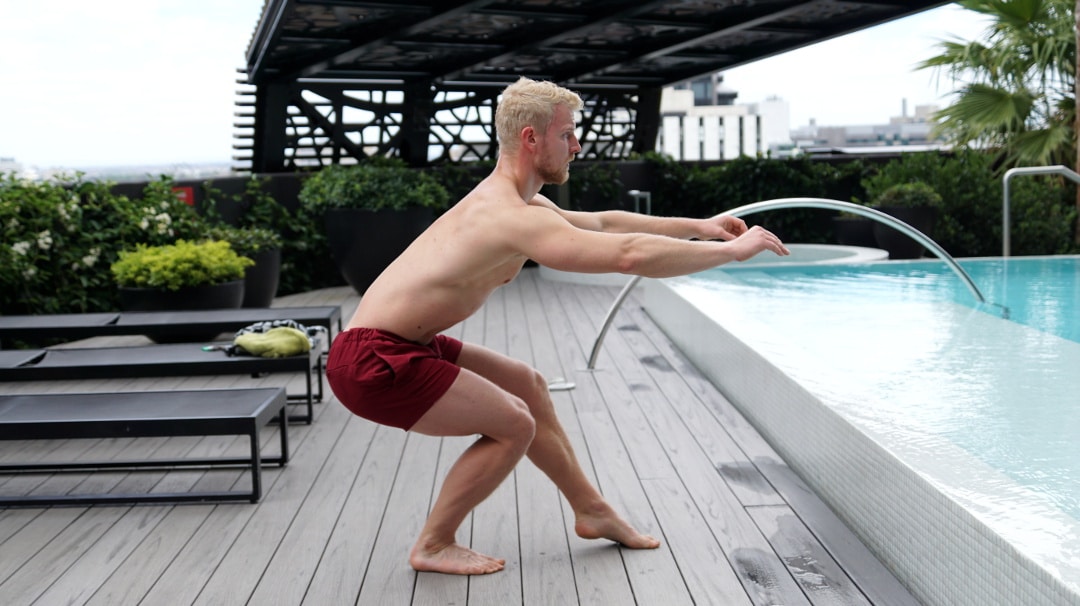 Shaolin squat is a squat version of the tiger stance that is commonly used in shaolin kung fu.

Compared to the pistol squat your hips and upper body should remain a lot more stable which makes the shaolin squat even harder to do. You want to try to sit as far back as possible.

Shaolin squat is one of the most challenging exercises you can do for your quadriceps and glutes due to the high demands of strength, mobility and stability.

Sissy squat is a notorious quadricep exercise which still today causes havoc in the world of internet because it looks so extreme and the knees are going past the toes.

There is nothing wrong with the knees going past the toes as long as your legs are structurally balanced. The movement is never the problem, the real problems are lack of structural balance and trying an exercise that is outside of your current limits.

Sissy squat should never be attempted unless your legs are in an excellent shape. When the legs are in a great shape, there should be no pain or discomfort in the knees. If there are, return back to easier squatting variations.

What makes the sissy squat a great squat exercise to master is the fact that it requires high levels of stability and balance from the lower back to calves.

Aladdin squat on the other hand is a wide sissy squat variation where the knees are pointing outwards. Aladdin squat will hit more the glutes and outer head of the quadriceps. 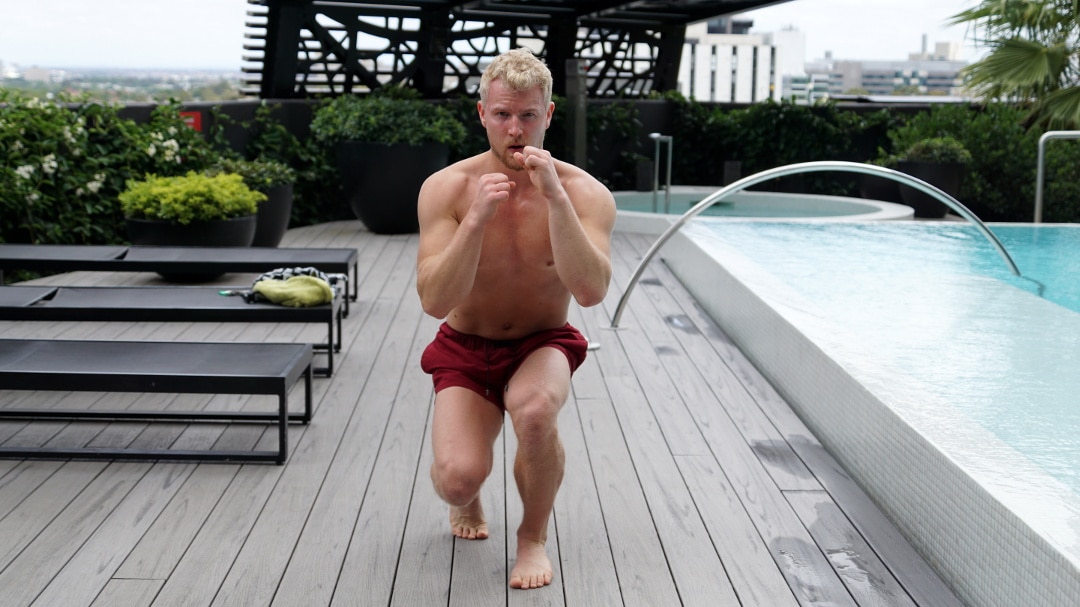 Boxer squat is a squat variation designed for fighters and martial artists. You take a narrow split stance and do squats.

Keep the upper body upright and your arms in front of you. The boxer squat will primarily develop your quadriceps but also your hamstrings and glutes.

Surfer squat is similar to the boxer squat but here your feet are positioned in one line while you stand on your toes. Raise your arms up and do squats.

You will notice that the surfer squat requires high levels of balance, hip stability and even core stability (obliques need to work hard to maintain posture). Calves are also worked to a great degree thanks to the stabilizing factor. 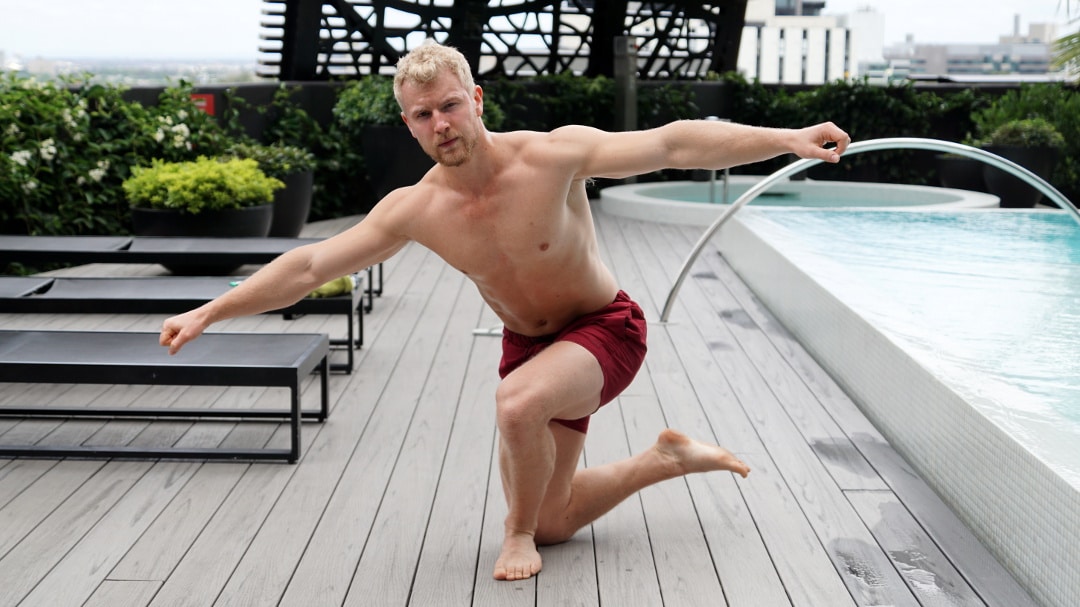 Curtsy squat comes from the popular curtsy lunge which is basically a lunge where the legs are crossed by placing the rear leg on the other side of the front leg.

Curtsy squat is similar except here you don't have any support from the rear leg. Keep the upper body stiff and rigid. All movement should come from the hips and the front leg.

Curtsy squat is not just about balancing and stability - it's actually a fantastic exercise to target the lateral glutes and outer head of the quadriceps. 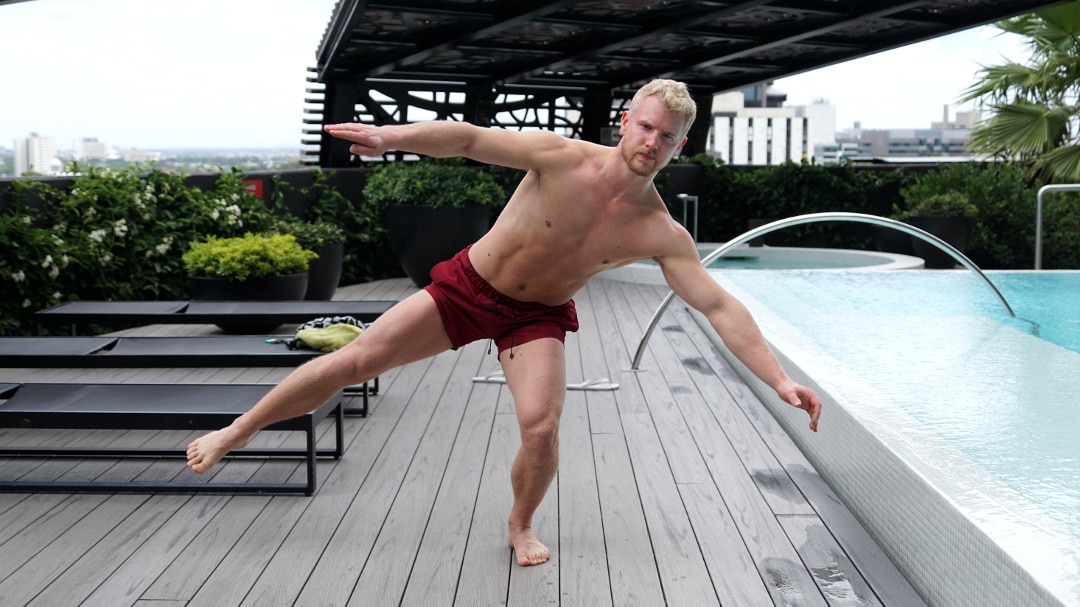 Angular squat is all about stability and balance. Both sides of the lateral glutes are heavily worked because the free leg needs to hold hip abduction while the supporting leg also needs to abduct the hip to provide stability.

Angular squat will mostly target the glutes, but your core and quadriceps also need to stabilize quite strenuously. 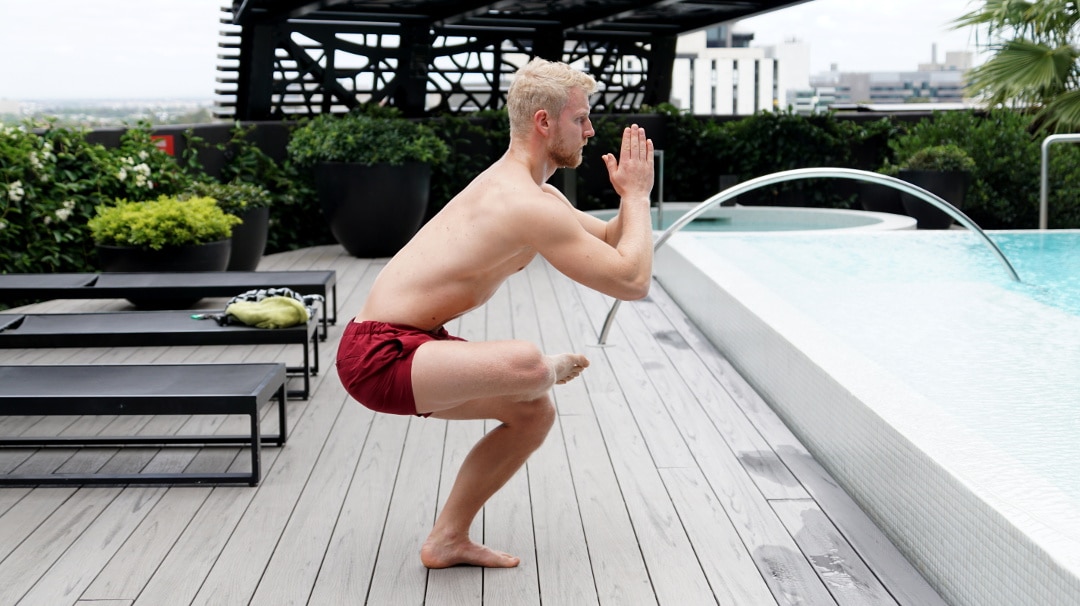 Hawaiian squat is a strength and flexibility exercise all in one. The front leg performs a traditional single leg squat while the free leg rests on your knee.

While you squat down, you will stretch the glute of the free leg. 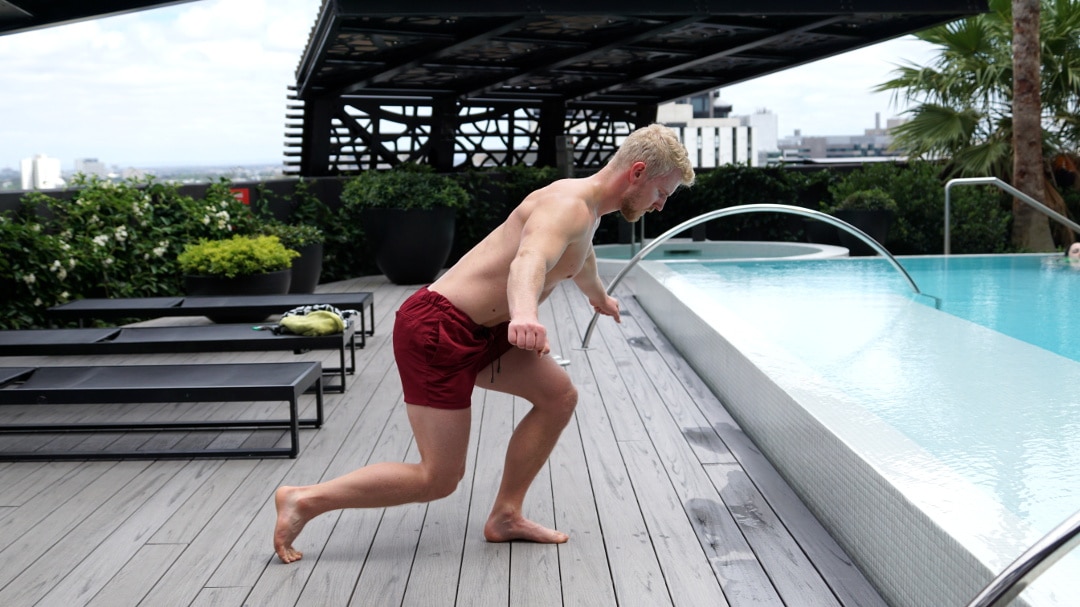 In the leg press squat you will hold a steady and stable bent over angle in your hips. All movement should come from the legs and not from the extension of the hips.

The leg press squat can be done with two legs or one leg. With one leg you basically perform a bent over single leg squat where you will never extend the hips or the spine.

Leg press squat should only target the quadriceps of the legs. The bent over angle will eliminate all lower back, glute and hamstring movement as long as you keep the body stiff and stable. 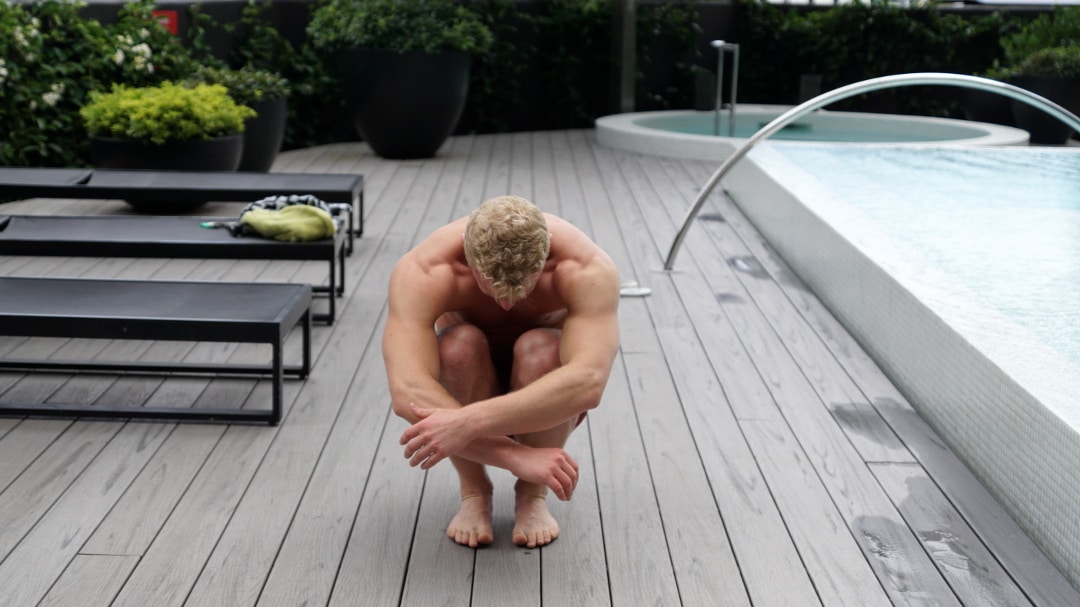 Yoga squat is a similar exercise to one of the mobility drills we have in our free mobility routine.

In the yoga squat you squat down, flex your spine and try to become as small as you humanly can by hugging your knees and flexing your hip flexors. Once you squat up, you will fully extend the spine and open up your body.

Basically yoga squat has the two important functions of the spine: closing (flexion) and opening (extension).

Yoga squat is great for the spine and should be doable for all fitness levels.

I wish you got some good ideas from this article and video. Train hard stay safe!